Posted on August 9, 2013 | Leave a comment
A poem from my manuscript Blueshift Road, “Da Capo al Fine,” has been featured at Dusie. Thanks to rob mclennan for asking me to contribute! 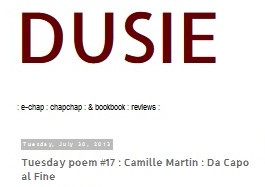 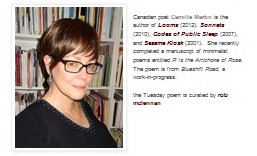 Fiddling While Earth Burns: Poems for the End of Time

Posted on December 18, 2012 | 2 comments
I’m obsessed with The End, with the smorgasbord of choices for Armageddon that Neil deGrasse Tyson cheerfully ticks off: asteroid, caldera eruption, mega-tsunami, black hole. Not surprisingly, some of my poems have an apocalyptic theme.
So in honour of the rapidly-approaching December 21, 2012—of the dreaded cataclysm that Mayan astronomers predicted (unless they just got tired of chiselling)—I’ll be posting poems to while away the countdown to the terrestrial torch. The first poem is below.
And what would 2012 prophesies be without a little shameless commercialism? I’m selling poetry, not opulent underground condos, but then, to paraphrase William Carlos Williams, survivalists die miserably on doomsday for lack of what is found in poems.
The clock is ticking, but you can still get a copy of Sonnets and Looms from the following vendors: Small Press Distribution, Book City in Toronto, Amazon.ca, and Shearsman Books.
Help keep my kitchen, where I’m hunkering down with proper Canadian garrison mentality, stocked with beans and rice during these anti-climactic end times.

*
From a helicopter at night, an aerial
view of a city. In the dark, gigantic
iron statues loom with an ominous
aura of permanence. The people
who live in the city obsess
about the possibility of doomsday
erupting among their soaring
buildings and effigies. Of the end
they’ve made a fetish, chatting
about it at cocktail parties as if
it were the latest vogue. They believe
that it could happen at any moment,
so they no longer bother
to make their beds in the morning. 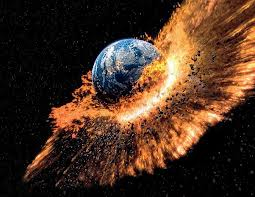 Posted on November 28, 2012 | 1 comment
Before the Skylab Gallery reading in Columbus, I went out with John and Cathy Bennett for a bite to eat. We had time to kill, so they suggested collaborating on cinquains.
Cathy published them on her blog. Have a look-see.