One of my favourite retreats on the ship was the far end of the stern behind the chains of the rudder. Leaning over the side, I gazed at the wake for hours on end. The waves came one after the other to lure my vision into their spirals, and to look away required a strong effort. The curls, the circular ripples, the bedlam, the eddying wavelets, the dances of the foamy trails, the struggles between the waves that reunited behind the keel, clutching and writhing, the formation of swift funnels trailing clusters of transparent bubbles in their vortex—all these little dramas of drop and foam held my attention with an irresistible fascination. Beyond the swift and twisting line of the wake, large surfaces of foam passed by, thrown aside to the right and left by the prow of the ship. Islands, archipelagos, and continents coalesced, broke apart, diminished, dissolved and vanished.
In reality, there is not a great difference, geologically speaking, between these continents of foam and the continents of land that we inhabit. Small or large, all phenomena are analogous: our continents also will dissolve and reform elsewhere, like clusters of white bubbles carried along by the wake of the vessel. 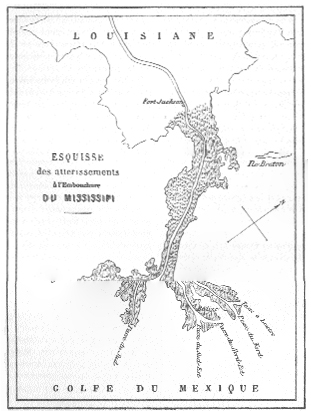 The above passage is from Voyage to New Orleans by French anarchist and geographer Elisée Reclus (1830-1905). In 1851, Reclus was exiled from France because of his protest of Louis Napoléon Bonaparte’s coup d’état. He traveled to Louisiana and in 1855 published an account of his voyage through the Caribbean and up the Mississippi delta, and his stay of several years in the city of New Orleans. His essay is a remarkable account, not only of geographical observations, but also of life in antebellum New Orleans from the perspective of an anarchist thinker. He astutely observed the political and religious corruption in the city and writes a moving condemnation of slavery after witnessing a slave auction.

I was drawn to this three-part gem because of the rich, poetic language of the young Reclus and because of his many astute observations about the natural world and human behaviour. In the summer of 1997, I translated it into English, and after polishing it with John P. Clark, we published it in 1999 as Voyage to New Orleans: Anarchist Impressions of the Old South.

Here’s the link to (e)Press’ reprint: