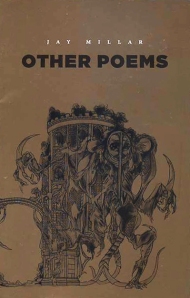 I could wax on about Jay Millar’s contributions to the Toronto poetry community and beyond as publisher of BookThug, co-founder of the Toronto New School of Writing, and poetry instructor (at TNSOW and George Brown College). And he probably wears more hats than I’m aware of. In short, a tireless and generous opener of doors for poetry to happen.
But Millar is also (and to my mind, first and foremost) a wonderful poet, one of the few whose work I keep returning to for inspiration. I’m most familiar with the last four books of this already prolific poet: ESP: Accumulation Sonnets, False Maps for Other Creatures, The Small Blue, and Other Poems. And it’s from his latest that I want to offer a sample.
Though I’m not really doing full-fledged reviews in my “Sampling” series, I’d like to mention just a couple of things that I admire about Other Poems. First is the subtle but pervasive theme of impermanence and mortality, which owes much to his understanding of natural cycles of creation and erosion, emergence and decline. To break the eligiac spell, Millar occasionally offers bouts of pure playfulness, as in “TRANSLATIONS FROM THE THE” (below).
Also, although Millar’s lyric voice often flows in a conversational diction, he’s also an artist of the beautifully sculpted sentence, as in

How to desire that crackle trees half
empty of leaves crackle?

Or could you possibly hear how
long the walk to chorus-less songs the lingual tics
are as likely as any to empty into.

No mere exercises in parsing (though that’s a pleasure in its own right), the complex and quirky syntax of these sentences draws us closer, in the act of unraveling them, to the heart of the matter. “Crackle” as both a noun and a verb draws attention to itself as the sound of autumn’s decay (as does “half / empty”), which makes the juxtaposition of “desire” with such decline even more jarring. And there’s something tautological about “the crackle that trees crackle.” The circular structure emphasizes decay as a natural and inevitable process in the cycle of life.
And in the second sentence, “how / long the walk” meshes with the long and rather twisted syntax of the sentence, both of which speak to the mysterious and largely unknowable journey between thought and utterance (and poem).
One more reason to get the book: Rob Lemon’s fantastical bestiary of images on the cover and throughout the book.
Here’s a sampling of poems:

I
How to desire that crackle trees half
empty of leaves crackle? A mind that
will run their minimalist instincts
through an environment only to
build nests into the whole of the sky. So
ghostly I recall some talk about
their presence, like names for mammals,
truncated communication that
listens carefully to the dispersed.
To listen to the wind is to see
a love, the feeling of settling love.

II
Autumn: some landscape the edges of the sky pulled
toward the earth for leaves to kick up the wind.

Can you sense the moment leaves halt for a fleeting
distraction of silence? Walk listens aloud

for the sound. What all the nameless creatures name. Some
relationship between two species in which one

obtains nutrients from the bodily function
of the other. Or could you possibly hear how

long the walk to chorus-less songs the lingual tics
are as likely as any to empty into.

in so many poems camaraderie invented
hung from the trees, their threads

any community that existed only in minds
anything I might address a poem to, but don’t

What points to itself inwardly,
and whispers. We want to participate,
speak for the dead, care for them,
care about them, tell them ‘we believe’—

I wandered around all day.
Whose woods is this? What lives here?
Will anyone record their thoughts?
Who will maintain the boxes?

Surely no one could invent themselves
without somewhere to store the keys.

I’ve never been handed the invitation.
I’ve slept, it’s true, but never dreamed here—
What would be the point?

This place is not sacred
enough to speak to anyone
as long as I’m thinking of you.


from “ENTROPIC: A NARRATIVE”

2
Driving the machinery deep into the landscape
Had been slotted into a very particular slot because it—
The whiteness—hurts my eyes most days.
Perhaps it was selfish, or a little unsettling,
How this particular light cast our shadows
Considering the weight of darkness
Was certainly quiet, how you say
The trying to figure out all the angles
That morning we gathered near the beach to ask
How the sun could bother to raise again, the impression
So hard against those who arrived.
Meanwhile, we are gathered here in a fashion
All the others wrote for us, and they keep on writing—
If anything it is a wondrous distraction.
I can only say this because
When the time came to interpret the script we saw
Water continue to erode the rock.


TRANSLATIONS FROM THE THE

To the point. Meanwhile, there’s
A decent ruckus with the flab.

Here chirp clunk and garble.
Give it effort. Give it a home.