Is this a Canadian poet? 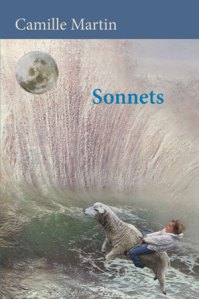 Is this Canadian poetry?

Some might shrug and say, “lip service”—especially considering recent budget cuts to the arts in Canada. Nonetheless, that statement as well as the generous granting system (generous especially when compared to comparable government funding in the United States) tends to create an atmosphere in which the arts are valued.
So as far as the government is concerned, I’m Canadian. And I pose as a Canadian poet for anthologies with the rationale that most of the poetry that I’m writing is born in Canada (does that make my poetic progeny second-generation Canadian?).
I also pose as an American poet because, after all, my poetic lineage is largely and undeniably American since I wasn’t exposed to much Canadian poetry when I started writing poetry in earnest. And besides, my American/Southern accent is hard to hide. Try as I might to switch to “zed” and to learn the subtleties of interjecting “eh” in conversation, I’m not sure I’ll ever pass the Canadian shibboleth.
And aware as I am of subtle (and sometimes not-so-subtle) manifestations of anti-Americanism, I trust that most people involved in the arts are enlightened enough not to harbour irrational prejudices against those Americans who have decided, for whatever reason, to leave the United States and embrace Canada. Surely attitudes have changed since the time when a Czech-Canadian painter was denied a grant by the Canada Council of the Arts because, as he was told by the panel, his work wasn’t “Canadian” enough. Following that rejection, he didn’t change his style but if you look closely, he has subtly worked into some of his paintings a maple leaf, as if to say with wry humour, ok, now is my work Canadian enough? Nonetheless, a Canadian press not long ago turned down a manuscript of mine because it was deemed to be “too American.” Is there a lingering bias against Canadian poets born in the United States? Does this reflect cultural protectionism, and if so, is there any place for this in decisions about grants and publications?
The 49th parallel isn’t meaningless—of course, Canadian poetry has its own heritage, lineages, traditions, schools, tendencies, and so on. I’ve noticed a more prevalent concern with political issues—ecology, feminism, poverty, diversity—in both mainstream and avant verse. And there is an ongoing fascination among many Canadian poets, especially of the experimental persuasion, with conceptual poetry: oulipian gestures seem to thrive here among certain poets and readers. Molly Peacock, in her forward to Open Field: 30 Contemporary Canadian Poets, notes another difference and gives the following advice for Americans reading that anthology:

“Don’t panic if each poem doesn’t start with a bang. While American poets train for the high-diving board, jackknifing into the deep end of the pool, Canadian poets presume that readers will let them wade out until their feet no longer touch bottom. So if you are used to the fast splash of the American poem, a Canadian poem may seem as interminable as a raga is to the listeners of a pop song. In other words, you may feel yourself wondering when these poets will get to their points. In fact, there will probably be several points; Canadian time is time unwinding, not time in a flash.” (xiv)

I could say something similar (though probably not as eloquently as Molly) about some American poetry. Nonetheless, broad strokes are useful for conceptualizing cultural difference. And Sina Queyras has some trenchant observations, in her introduction to that anthology, of some of the characteristics and tendencies in Canadian poetry, especially regarding attitudes toward nature. Such anthologies, designed to introduce Americans to Canadian work that deserves to be appreciated, are needed to bridge the gap of ignorance on the part of American readers. That kind of cultural exchange can only be a healthy thing.
The cultural differences between Canada and the United States are also reflected in daily life, and I can’t write an essay about being an American poet in Canada without commenting on such differences that I immediately became aware of when I set foot in Toronto in February 2004 to get a feel for the city where I wanted to relocate. Observing the advertising in the streets and subways, I noticed that the atmosphere of crass commercialism and materialism to which I was accustomed was a little toned down, and public service billboards were more frequent. The lack of racial tension on the streets was a refreshing change from the charged and often angry atmosphere in New Orleans, a city that still carries the baggage of historical racism. The rude, sexist comments by men in urban American streets were simply non-existent here. Once, as I was emerging from a Toronto subway station, a young man called out to me, smiling, “Looking good tonight!” It was sweetly appreciative; I smiled back.
And I felt relatively safe in Toronto. I remember walking after dark with another woman to a poetry reading soon after I moved here. She decided to take a short cut through a park. I was terrified. “Are you sure it’s safe?” I asked. She just laughed and kept walking. I followed, looking around warily. I don’t think she realized the extent to which people in New Orleans are regularly mugged and even killed in parks. Tourists wandering into New Orleans’ famous parks and cemeteries are easy targets. “Another tourist shot in Armstrong Park” became an unfortunate cliche. New Orleans remains the murder capital of the United States—an extreme example, perhaps, but all major American cities struggle with similar kinds of problems—poverty, crime, racism, poor education, extreme divisions of wealth and poverty, and the ill-effects of decades of unaffordable or unavailable health care and other social services. Canadian cities struggle with some of these issues as well, but generally speaking, the problems are not as extreme as in the United States.
I’m thrilled to be living in Canada, and I have come to love Toronto. I live downtown, in the heart of Old Toronto, in a cooperative apartment complex. The building is owned by a non-profit corporation; thus there is no landlord charging exorbitant rent while neglecting repairs. When I first moved here, I felt like Mary Tyler Moore in Minneapolis, ecstatically tossing her hat into the air (if you’ll pardon the American pop culture reference). After experiencing the demoralization of life in New Orleans, pre- and post-Katrina, I was elated to live in a city and a country with a different social ethos.
As happy as I am to be here, I suppose I will continue to side-step the issue of Canadian-ness by simply saying that I’m a Toronto poet or to be even more neutral that I’m a poet based in Toronto. But I will also say that living in Canada has been extraordinarily good for me, and I wish I’d moved here years ago. I love many aspects of this country like I never loved the United States. I’ve come to admire many Canadian poets whose work I was never exposed to before I moved here. I’m here to stay.
Am I masking, through my ambivalence, a secret desire to be Canadian, cut and dried, strong and free? No doubt. Part of me likes the idea of being Canadian. But I also know that the issues of nationality, ethnicity, and identity are a lot more complicated, for those born in Canada as well.
My eyes are blue-green. Some days I see them as blue, other days as green. I can talk about the genetics of the colour, the lineage of ancestors from whom I inherited either colour, the factors that influence the colour that I perceive on a given day (such as the clothes I’m wearing, or my lover describing them as blue). I can talk a lot about those things. But deciding which side of the colour fence I’m on is just not something I’m very passionate about.