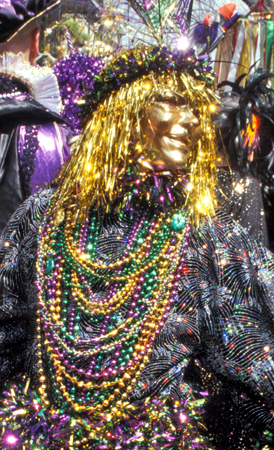 All photos on this page copyright Camille Martin.


Although Fat Tuesday isn’t until February 16, New Orleans is already well into the Mardi Gras season, which began on January 6. It’s what I miss the most about living in New Orleans. As for as I’m concerned, the place to be on Fat Tuesday is the French Quarter. Because of the narrow streets, tractor-drawn floats are impossible. So the parades hoof it: The Krewe of Kosmic Debris and the Krewe of St. Anne are the two to see. In these krewes, there isn’t really a central command deciding on a theme to unify the parade. And no top-down decisions means a fantastic array of individuals and small groups strutting their alter-ego costumes, snaking their way through the old city. Waves of colour flow through the streets, and just when you think sadly that the parade has ended, another motley wave arrives.
For several years, I went to the French Quarter on Fat Tuesday as Frog Lady along with other members of the True Church of the Great Green Frog. We celebrated Frog Mass in front of St. Patrick’s Cathedral by eating frog pastries for communion and singing froggy hymns (“Amazing Frog,” among others), and generally spreading the word that “Frog croaked for your sins.”
I had come up with the idea to construct a two-person frog litter on which a giant stuffed frog sat on a satin cushion, surrounded by incense and decked with Mardi Gras bead necklaces. Carrying the amphibious deity around on a litter was fun, but it meant that my hands weren’t free to take photos. So in 1999 I decided to walk around the Quarter just taking pictures. I was in photographer’s heaven.
The following gallery is the first of three installments of these photographs. I hope that you enjoy viewing them as much as I enjoyed taking them. Frog is Love!

PS: Following this gallery is a an excerpt from “Fat Tuesday’s Heterotopic Splash,” a piece that I wrote for Streetnotes: Cross-Cultural Poetics and revised for this post. 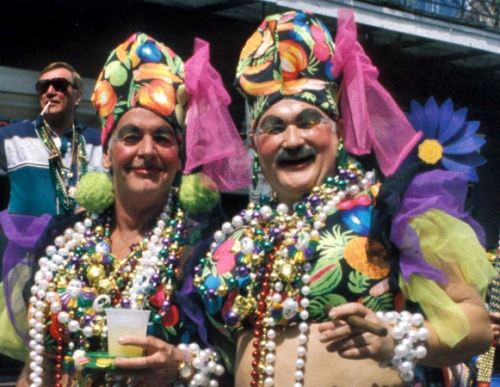 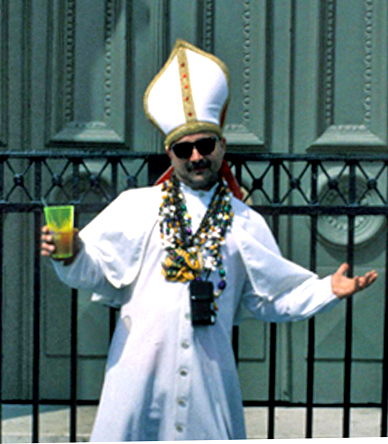 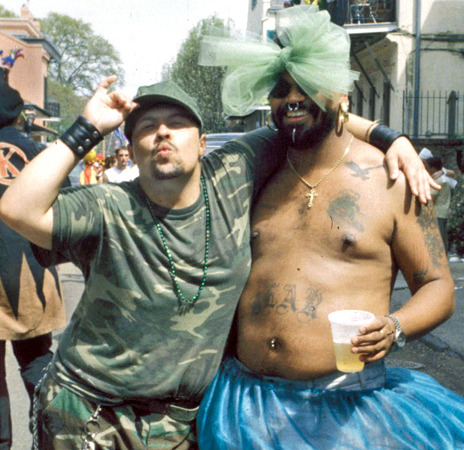 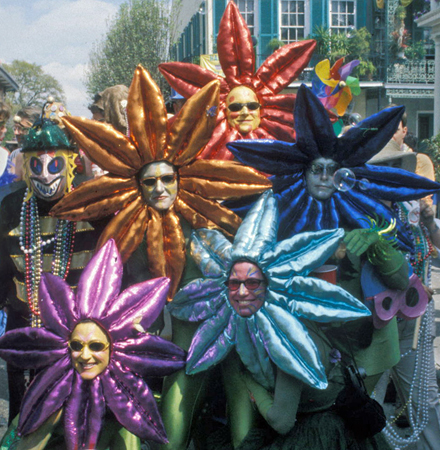 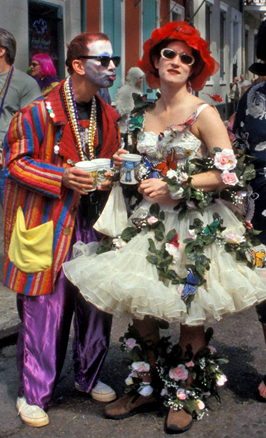 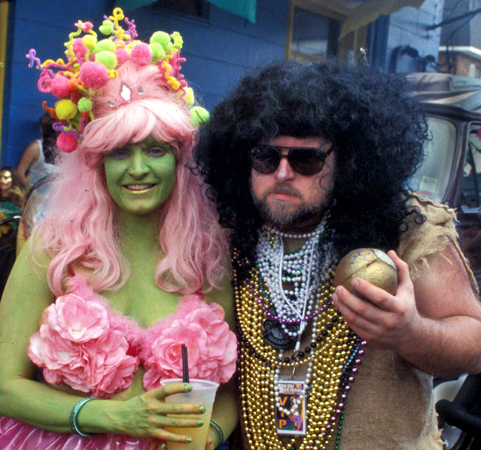 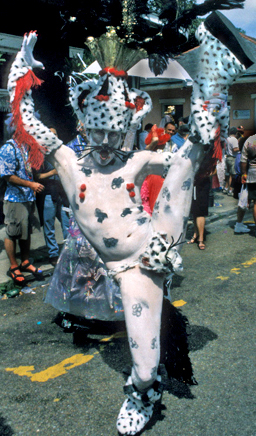 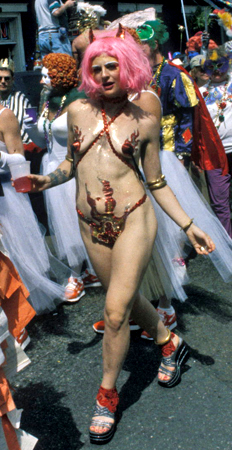 HERE’S A LINK TO THE SECOND GALLERY

Mardi Gras in New Orleans contains multitudes, and one of the best places to appreciate its polymorphic revelries is the French Quarter on Fat Tuesday. You only need to avoid most parts of Bourbon Street and the sophomoric guys on balconies coaxing young women on the street below to bare their breasts for the price of a few dangled beads of glittering plastic. A few steps away, a heterotopic paradise opens up: two walking parades (the Society of St. Anne and the Krewe of Kosmic Debris) and the Bourbon Street Awards, a mostly gay costume contest, fill the streets of the Vieux Carré with explosions of color and fantasy.
Here, desires are set loose in a spectrum of attitudes ranging from sublime to ridiculous, mundane to bizarre, deadpan to satirical, erotic to bo-peepish—and everything in between. Some costumes mimic or satirize the familiar pop idol, while others celebrate unrecognizable life forms. The parades feature no overriding theme, but instead invite individuals and groups to explore uncharted and prismatic identities through masking. Categorical sexual identities are drained and then re-envisioned, suggesting a plethora of newly-invented gender cocktails.
In the great street theater of Mardi Gras, privacy is banished, and the public space reigns. Normal conventions of public encounters, such as averting one’s gaze from the approaching stranger (at a distance of eight to ten feet, according to a study in Manhattan) or avoiding unnecessary verbal exchanges, are tossed out. One calls out to the other (“Hey, Pink Showgirl!” “Over here, Mirror Man!”) and the other obliges with a smile and a wave, or poses with dignified or exuberant theatrics.
Exhibitionism and voyeurism are the symbiotic soul of this communal promenade, where it might be considered impolite not to stare at the phantasmagory of characters passing by or to show off your own alterity that you might normally keep carefully veiled. The revellers perform their freakishness to satisfy narcissistic urges and to give delight to the gazer; gazers stare for their own pleasure and for the gratification of the performer. Thus a spirit of cooperation flourishes in the theatrical dialogue as chance conjunctions of identities suggest odd or outright bizarre narratives. Carnival in the French Quarter revels in incompatible sites: it is the epitome of the celebratory heterotopia.
After the well-practised street cleaners and dump trucks roll into action to clear the roads of debris at the stroke of midnight, only questions remain. Are the identities unleashed through this carnivalesque mining of the psyche more true to the self than the groggy, hungover shadow that awakens on Ash Wednesday to a sadly diminished and color-drained universe? Where did the fantastical self that flourished yesterday scurry off to? And when will it re-emerge?