Gail Tarantino: Learning to Use a Spoon by Reading Braille

Posted on July 22, 2009 | Leave a comment
I was excited today to discover the visual art of Gail Tarantino through three works in the December 2008 issue of Cricket Online Review. Her bio tells of her “not-so-secret desire to be literary” in her work, and her weaving of “compressed narratives and distilled description” with the “rhythmic and musical aspects of language.” Like artists such as Ann Hamilton, there is a conceptual sophistication in the way that Tarantino uses language in her work. Interestingly, both have used Braille. For the 1989 Venice Biennale, Hamilton rendered Charles Reznikoff’s Testimony: the United States (1885-1915) into Braille in an installation entitled Myein. On a much smaller scale, Tarantino’s One Act in Cricket features a sentence in Braille: 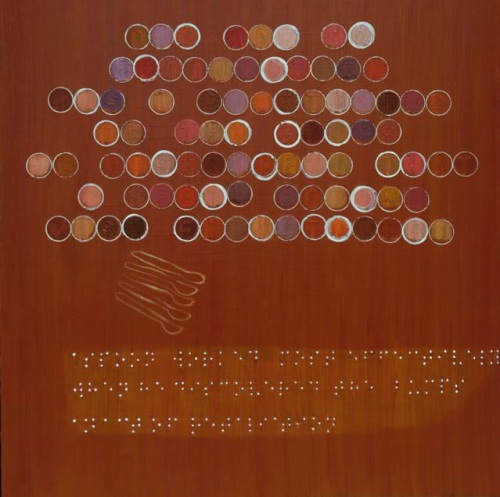 In order to understand the interplay among the images in the three horizontal fields, it is necessary to decipher the Braille, something that I at first resisted. But my curiosity prevailed and I arranged the work on my screen next to a Braille alphabet and proceeded to decipher the sentence, letter by letter, yielding the following:

As I progressed, the act of decoding it became easier, due to my increasing familiarity with the configuration of dots and the fact that after a few letters, guesswork came into play. A long word beginning with “effe . . .” can be guessed pretty accurately. But the slowness of my reading made me aware of how much take reading for granted, in a similar way that I take eating with a spoon for granted. Mulling over each letter in Braille slowed down the process. My brain, racing ahead of my slogging pace, was thinking of various possibilities, leading me to make incorrect assumptions a couple of times. I was taking too long to think about the text, so my mind was impatiently filling in the gaps in an effort to understand.
After deciphering the words, I realized that my effort was roughly analogous to a child learning to eat with a spoon: both are, as the title suggests, “one act.” This analogy is supported by the echoing of the shape of the Braille’s background colour, which is reminiscent of a spoon.
Tarantino compels viewers who do not know Braille to experience the unfamiliarity of the text and the opacity of its meaning until we decipher it, letter by letter. And in the act of doing so, we become conscious of the configurations of dots in each letter, recalling our original experience learning to read as a child, tracing the shape of each letter, as well as discovering the shape and usefulness of a spoon. Our reward is discovering something about writing as medium for communication, its thingy existence, as opposed to it being a system endowed with inherent meaning.
Significantly, the understanding of the Braille sentence is crucial to speculating on the meaning of the middle and top portions of the work. The middle portion consists of a series of spoons, one rather flat, like a knife, and the others in the familiar rounded concave shape.
The top half of One Act consists of scores of what look like little bowls. Some are missing, so that the pattern echoes the Braille in the bottom half. They are also different colours, resembling perhaps little pots of paint or perhaps bowls of soup, or food in the concave part of the spoon, the reward of the savvy child.
The question arises as to why Tarantino would describe the act of learning as on of retaliation, assuming that I am understanding the Braille sentence correctly. Retaliation requires first an act to retaliate against, so it seems plausible to assume that “he’ is retaliating against the opaque meaning of the spoon’s shape prior to his figuring it out, an opaqueness that strikes him as an act of hostility, which he counters by learning the usefulness of the spoon’s “bump.”
Carrying over the ideas in the message to the analogy of learning to read, the Braille sentence might suggest the concept of violence in the act of understanding. This idea is expressed in a set of conceptual metaphors in English, such as “to attack (or tackle, or surmount) the problem,” “to struggle with the meaning of something,” and “to fight ignorance.” These all suggest that understanding is a process of overcoming that which we don’t at first apprehend: the child “overcomes” the spoon’s unintelligibility; the uninitiated tackle the illegibility of Braille. And that violence is a retaliation against the violence of opacity, of being faced with something that is (at first) illegible.
Derrida’s theories on the violence of writing come to mind here, of writing regulating meaning, inscription as prohibition, law, circumscription. Before we deciphered the Braille, its meaning was opaque to us; it shunned our desire to understand it. Thus it might appear that Tarantino is turning the tables on the idea of violence inherent in writing, for the text (or the spoon) do their violence by remaining unintelligible, and the reader retaliates by learning and understanding. The violence of the reader is not the same as the violence of writing, for in Tarantino’s work, the reader’s violence is against illegibility. And meaning, interpretation, writing, and learning are not inherently acts of violence.
I may be overreaching in my musings here, and I certainly don’t mean to suggest that this is the only way of approaching this work. As One Act implies, there can be many different rewards to learning how to use a spoon, as the many bowls of soup in different colours attests, and by extension many different ways to understand a text.
In any case, I sense an acute intelligence at work in Tarantino’s work. It grapples with (to continue the conceptual metaphor) questions of representation, writing, legibility, and meaning in a condensed yet open-ended work. Did I mention that it’s also beautiful?
I highly recommend her website, where many of her works can be found:

Derrida, Jacques. “The Violence of the Page.” Of Grammatology. Tr. Gayatri Chakravorty Spivak. Baltimore: The Johns Hopkins UP, 1976.