Tag Archives: The Next Big Thing

The Next Big Thing: R Is the Artichoke of Rose

Posted on February 10, 2013 | 2 comments
If you haven’t heard, The Next Big Thing is a self-interview about a manuscript or forthcoming book. The set of interview questions spreads like a chain letter. Once every poet on earth has participated, we’ll send a space probe to exo-planets suspected of hosting alien poets sufficiently evolved for onanistic interviews.
I was tagged by Marthe Reed to participate, and in turn I’ve tagged five more poets, whose blogs are linked below. Once they’ve posted their response, I’ll publish a link to them.
Here’s my interview:

What is the working title of the book?

R Is the Artichoke of Rose

Where did the idea come from for the book?

From a collage of mine, R Is: 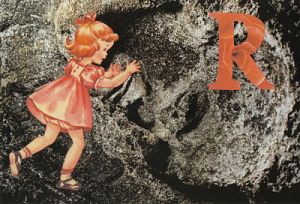 What genre does your book fall under?

What actors would you choose to play the part of your characters in a movie rendition?

Elmo and India.Arie in a musical about the letter R.

What is the one sentence synopsis of your book?

R is the artichoke of rose.

How long did it take you to write the first draft of the manuscript?

I’ve been writing short-short poems for many years, publishing them in such journals as Fell Swoop, Peter O’Toole, Quill Puddle, and Unarmed. Eventually the little critters coalesced into something greater than the sum of their parts.

Who or what inspired you to write this book?

Minimalist poetry by other poets, from the epigrams of Martial to the pithy gems of Aram Saroyan.

What else about your book might pique the reader’s interest?

Will your book be self-published or represented by an agency?