Michael Mann has just produced a couple of colourful issues of unarmed, his modestly produced little treasures of magazines and chaps. unarmed #62 features a collage by Steve Dalachinsky on the cover: 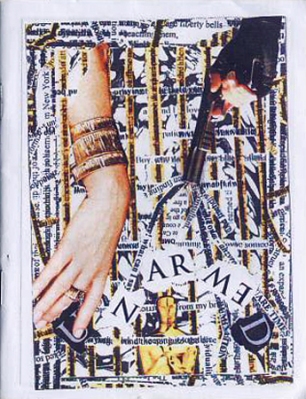 Included in this issue are one of mine, “The Sword’s Brayer” (a homolinguistic satire on The Lord’s Prayer), as well as poems by Simon Cutts, Joel Dailey, Sheila E. Murphy, Michael Basinski, Vernon Frazer, Nicholas Ravinkar, Tom Weigel, Michael the Mann himself, and many others. Here are a couple of samples from the issue:

still my luck holds its tongue in a rhapsody of reticence
a silence more reliable than passion, of lyrics made from time’s
contention that it was once forbidden to forbid

an inly response to the unavailing spinozistic distaste for courage
my heroes, our carcerals, and the habits of flesh
“together in one bed (the dears)”

And the chap that came with #62,  Change of Address by Jake St. John, features on the back and front covers water colours by Kimball Lockhart: 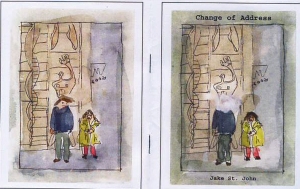 An excerpt by Jake St. John: