All That Glitters on the Spiderweb: Myth, Race, and Denial

Posted on September 24, 2009 | Leave a comment
After living for ten years in upstate New York, where I had never quite felt at home, I decided to return to my hometown of Lafayette, Louisiana, where flowers grew year round, people spoke in the soft, lilting accents of Cajun French, and I could eat crawfish étouffée to my heart’s content. No doubt there was a hefty dollop of romanticized nostalgia in my decision. In any case, I packed up my belongings and drove a big U-Haul south. Three days later, the humidity felt just about the right thickness, and I knew I was home. I took an apartment in Bayou Shadows, a sterile complex probably named by a focus group, and got a job as a secretary in a company that provided tools and labour for offshore oil rigs.
Over the next few months, I reacquainted myself with the local culture, attending celebrations like the Frog Festival in Rayne, the Cajun Music Festival in Mamou, and of course, Mardi Gras. I also visited Vermilionville, a recreated Cajun village on the banks of Bayou Vermilion showing life in Acadiana from settlement (1760s) to the late nineteenth century. It was recommended to me by my cousin, whose partner had a job demonstrating for the tourists the making of bousillage, a mixture of bayou mud and dried moss that the Cajuns used to plaster their walls. I felt a little sad to see the period costumes, Cajun-style homes and furniture, and farm tools, all authentically recreated and frozen in time.
When I was growing up, there were still some survivals of this old way, such as the “gar’ soleil” a practical bonnet that my grandmother wore to shade her face from the harsh sub-tropical sun, and the old plow pulled by mules that my grandfather was still using for his cornfields when I was a child. That way of life was gone, though you could still buy Cajun bonnets as a souvenir in the gift shop at Vermilionville. Seeing artifacts from the my culture ossified in a museum, I felt as though a part of my past were now being recaptured, tested for authenticity, and put on display. It was a lesson in impermanence that I was reluctant to learn.
While I was away in upstate New York, my father had immersed himself in genealogy. He and my mother collected hundreds of photographs and paintings of ancestors, and filled boxes upon boxes of documents photocopied from court records: marriage certificates, wills, contracts. They also collected and framed farm implements such as old cattle brands, correctly assigned to their owners. My father was becoming a kind of living Cajun icon, obsessively collecting the paper trail of his ancestors as a way of holding on to a culture that was swiftly dissipating as assimilation into the “mainstream” took its toll.
But nostalgia takes its toll on history, and the longing for a lost arcadian past tends to flatten the complex layers of history. What remains is an idealized mythology that takes the form of whatever fantasy nostalgia has invented. Perhaps it’s a vision of happy-go-lucky Cajuns whose unadulterated culture thrived in relative isolation from “les Américains.” Or perhaps it’s a fantasy of the good old antebellum days of oligarchy in the Deep South: wealthy plantations, elegant ballroom manners modeled after European nobility, and ultra-cheap labour. Whatever the fantasy, nostalgia creates a vision of life that used to be simple and pure, uncomplicated by the complexities of cultural hybridity and the inhumanity of slavery. This was another lesson that I was reluctant to learn. After all, I was in search of Cajun authenticity, and I was on the verge of buying into this vision of a lost culture innocent of divisions and contradictions; it was the misty, sunlit, and idealized vision of a lost childhood. Growing up during Jim Crow and witnessing the turmoil of the Civil Rights movement and the first attempts to integrate a society of institutionalized racism left an indelible mark on my psyche. But returning to Cajun country full of wistfulness, on some level I still clung to the belief, despite evidence to the contrary, that racism was not imprinted onto the Cajun social fabric.
After my move home, I would sometimes drive in the countryside around Lafayette, with no particular destination in mind. I was looking for “authentic” Cajun life in the small towns where life wasn’t self-consciously re-enacted for the benefit of tourists, where life had not become a series of footnotes and framed antique tools. On one of those drives I found myself in St. Martinville, a town where many of the Acadians had first settled after arriving in Louisiana from Acadie, now Nova Scotia, in the 1760s.
I had been to St. Martinville several times as a child to visit the St. Martin de Tours Catholic Church. To me, it was the quintessential Cajun shrine: an historic eighteenth-century church built by the early Acadian settlers. Next to the church was a statue of a virgin—not Mary, but Evangeline, symbol of the Acadian diaspora.

Evangeline was a character invented by Henry Wadsworth Longfellow in his long tragic poem based on the French Acadian expulsion by the British from Nova Scotia in 1755. Families were often split up as they were forced to hurriedly board ships during “Le Grand Dérangement,” and in Longfellow’s poem, during the loading of the Acadians onto the ships, Evangeline becomes separated from her betrothed, Gabriel. According to one version of the legend, on arriving in Louisiana years later, Evangeline discovers that Gabriel has already married another. After becoming mentally unhinged due to the shock, she dies of a broken heart and is buried under an ancient live oak tree in St. Martinville.
Even though she is an entirely fictional character, the tourism industry perpetuates the myth that she was based a real person (Emmeline Labiche, another fabricated character) and is actually buried under a live oak near St. Martin de Tours Church. 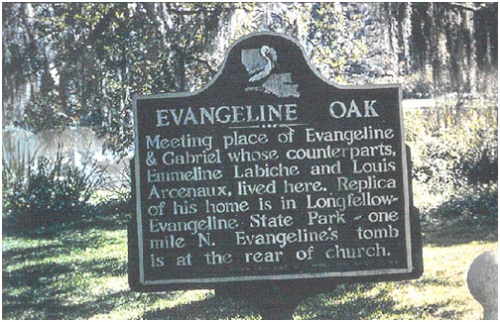 Layers of truth and myth are easily confounded where there is the desire to believe. Of course, there must have been many Evangelines and Gabriels, lovers separated during the expulsion of the Acadians, but none buried under the old oak tree at St. Martin de Tours.
I sat near the statue of Evangeline, which used to represent to me a fixture of the Cajun imaginary, an icon of the Cajun diaspora. The plaque at the base, translated into English, reads as follows:

* * * * *
Evangeline
Emmeline Labiche
Old Cemetery of St. Martin
In Memory of the Acadians Exiled in 1755
Statue of Evangeline, heroine of the Acadian deportation to Saint Martinsville in Louisiana.
* * * * *

Although there was no mention of a model, I remembered that the statue was in fact a replica of Delores Del Rio, the Mexican-American actress who played the lead role of Evangeline in the 1929 film.