Serendipity and the Felon: Jiri Kolar, Emmet Gowin, and the Cognitive Iceberg

Posted on July 12, 2009 | Leave a comment
A few days ago, I was searching for images by one of my favourite collage artists, Jiří Kolář, whose last name, pronounced in his native Czech, sounds like “collage” (no doubt an example of true serendipity). I found two images from his series “Three Graces.” 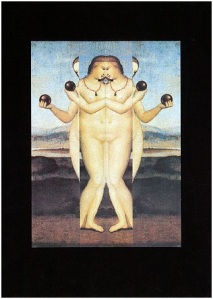 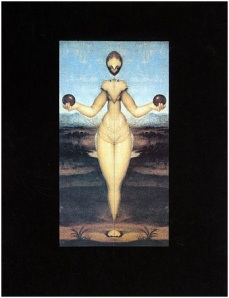 I have admired these since I was first exposed to the work of Kolář at an exhibition at the Albright-Knox Gallery in Buffalo. He uses as source material Raphael’s painting of the Three Graces holding the apples of the Hesperides, which are supposed to grant immortality.

The depiction of the three Graces of ancient mythology traditionally shows two facing the viewer and the third in front of them, with her back to the viewer. Kolář seems to be playing with that traditional positioning, manipulating the bodies of the Graces using symmetry and mirror imaging so that the three seem to be merging into two in the first collage, and into one in the second collage.

Around the same time that I was studying these collages, I began thinking of Southern photographers, like Clarence Laughlin, Bellocq, and Emmet Gowin. A search for images by Gowin led quickly to a photograph very familiar to me, Nancy, Danville, Virginia, 1969, featuring a double-jointed girl who intertwines her arms in front of her and delicately holds an egg in each hand. 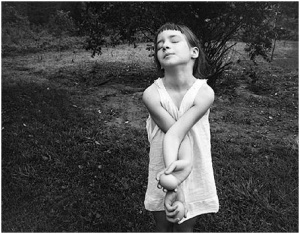 Here’s where the question of serendipity started to surface. I found correspondences between Kolář’s Three Graces panels and Gowin’s Nancy to be striking: both have an otherworldly, delicate quality, and both depict females with oddly manipulated or twisted arms, holding round objects in their hands. I couldn’t help but wonder whether the association was entirely serendipitous or whether my mind had been leading me to Gowin’s photograph by a process of nonconscious association.

It’s possible that the association was fortuitous, but I don’t think that the idea of an associative process unbeknownst to consciousness is too far-fetched to be plausible. I can demonstrate stranger and more involved associative pathways in which my nonconscious mind seems to be feeding me hints, like a criminal toying with a detective, until the detective experiences the eureka moment and the elusive felon once again slips away.

But how can we really know whether a particular association, like my pairing of Three Graces with Nancy, occurred by chance? Neuroscientist Michael Gazzaniga notes that the brain is like an iceberg: upwards of 90% of cognitive functions are not available to conscious awareness. This unavailability of much cognition to consciousness can make it seem as though there were another thinking entity (or perhaps multiple entities) within us, one that knows far more than our imaginary little conscious homunculus knows, and knows it before the homunculus gets clued in. Here’s an outdated depiction of how the mind works, with all processes coming together in a central location to be understood by a central processor (shown here as the homunculus): 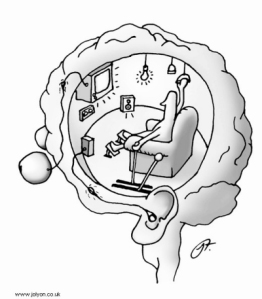 Of course, there isn’t anything like a little person inside our heads, or anything like a control centre in the brain, a central processing unit where perception and thought come together and the will of the cognitive CEO gets executed. This dualistic fallacy is known as the endless regression of homunculi: 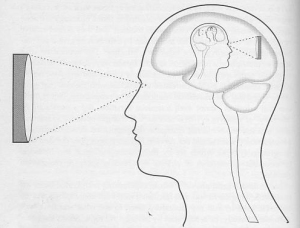 "The endless regression of homunculi. The idea of instruction or information processing requires someone, or something, to read it. But a similar entity is then required to read the resulting messages, and so on, endlessly." Gerald M. Edelman, Bright Air, Brilliant Fire: On the Matter of the Mind, p. 80

After we have traced back our mental associations, the realization that something had been brewing in the deeps all along and that, as Antonio Damasio claims, “we are always hopelessly late for consciousness,” is unsettling. But I wouldn’t trade the dialogue with my teasing “felon” for a homunculus, or for serendipity, for that matter. In Kolář’s two collages, merging and symmetry have the effect, not of producing unity, but of accentuating disintegration. In the first collage, disembodied limbs and faces emerge out of nowhere, and in the second collage, the seemingly unified body is in reality disconnected from her head and feet.

Similarly, we can never merge our cognitive Graces or know them completely. That proposition once again buys into the idea of the mind as having a converging point of information, whereas scientists have discounted hierarchical and linear systems in favour of a multiplex system of connections that are “parallel, recursive, feedforward, and feedback” (Richard Cytowic, The Man Who Tasted Shapes, 156).

The idiom “my mind is playing tricks on me” aptly expresses the idea of a divided mind. Kolář’ plays tricks on our eyes with the mirrored image of the Graces merging towards a centre that can never unify them but only further discombobulate them.

I haven’t found a third panel in Kolář”s Three Graces series, but one can imagine that further unification of the image along the mirror’s edge would cause the Graces to vanish into thin air.

And however mysterious and unavailable to consciousness are the tricks the Graces play on themselves, these tricks enable the mental associations from which we create our worlds. Like the girl holding the eggs in her twisted arms, they affirm creation and bring new realms into being.