Robert Zend’s international openness was remarkable, especially during a time when a broad tendency in Canadian culture was to look within Canada’s borders for inspiration in order to foster a national cultural identity. As a cosmopolitan Canadian writer and artist, Zend found affinities and friendships not only in his home countries of Hungary and Canada, but also among a writers, artists, and cultural traditions around the world.
In the last few installments, I’ve discussed his aesthetic kinship with cultural figures in Hungary (Imre Madách, Frigyes Karinthy, and the Budapest Joke of Eastern European Jewish tradition), Canada (Marshall McLuhan, bpNichol, Robert Sward, Robert Priest, The Four Horsemen, Glenn Gould, and Norman McLaren), France (Marcel Marceau), Argentina (Jorge Luis Borges), and Italy (Giacomo Leopardi and Luigi Pirandello). In addition, after his move to Canada, Zend connected with immigrant writers and artists from Italy, Czechoslovakia, Hungary, Japan, and Spain, sometimes engaging in creative collaborations with them.
The current installment, which focuses on Belgium (Magritte) and Japanese traditions (haiku and origami), will end my exploration of Zend’s international affinities.
In the next installment, the last substantive one in this series, I’ll show Zend as a multi-media artist who not only worked in more traditional paper collages but also used such unusual materials as thumbtacks, string, toilet paper rolls, and automotive gaskets, and exploited technologies such as the typewriter and the computer to create his visual art. In addition, Zend was a self-described “inveterate doodler,” the truth of which I learned from sifting through the extensive Zend archives at the University of Toronto. From this research, I’ve culled a variety of these sketches, from casual to intricate, poignant to humorous, as well as selected a few examples from his unpublished manuscript entitled How Do Yoo Doodle?.

An Eight-Ball for Magritte

Zend developed his own unique spin on surrealism, informed by an early interest in the fantastical in Hungary and nourished by his study of surrealism in artists such as René Magritte. Of the influence of the latter, most obvious is the portrait of Zend on the cover of Beyond Labels, designed by John Lloyd. The face of the formally-attired Zend is obscured by a large eight-ball; another eight-ball floats in the cloudy sky. The image bears a striking resemblance to Magritte’s 1964 self-portrait with signature bowler hat, Le fils de l’homme, face similarly obscured by an apple (figs. 1 and 2):

Magritte’s own words bespeak the themes of concealment and unknowability in his art:

In Magritte’s statement can be heard an echo of Marcel Marceau’s concern with masks and with illusion and reality, and the passage also strikes a chord with Zend’s own literary and artistic themes.
“Climate,” for example, Zend’s prose poem dedicated to Magritte, is likely an ekphrastic poem based on any of several paintings by Magritte in which the separation between interior and exterior is either confounded or based on an illusion:

In the room in which I work it often rains. Sometimes the sun shines, but usually it’s twilight. Bright in one corner, dark in another, the weather can’t seem to make up its mind.
When I can’t take much more of it, I wander outdoors. The hills are gentle, the brooks are bubbling, the trees are whispering. Then I switch on the overhead light, turn up the heat, draw up a chair, sit down in front of my desk, and begin to work — until the clock tells me it’s time to quit.2

Weather incongruously occupies the writer’s room. And this weather is personified as fickle: it “can’t seem to make up its mind.” The writer seeks relief from the vagaries of the room’s elements and light by wandering outdoors through a soothing scene that is as clichéd — babbling brooks and rolling hills — as it is illusory, instantly morphing into an ordinary interior with overhead light, desk, and clock. In going outside and then inside, the writer has crossed no literal threshold, a clue that the divisions between indoors and outdoors, fickle and pleasant weather, and fantastical and quotidian are not literal either.
Instead, Zend renders a metapoetic image of the act of writing. The writer, disturbed by indecisive climate (perhaps a symptom of writer’s block), mentally steps outdoors into a calming, postcard-like scene, which seems just as unreal as the capricious indoors climate. The artificial banality of the landscape creates the degree of calm distraction that facilitates creative flow. But the results of that flow are not revealed, and the fashioned scenes of room and outdoors, of interior and exterior, themselves become the artifacts of writing, including the oddly mundane yet somehow apt ending: “until the clock tells me it’s time to quit.” Paradoxically, the poem’s subject (the writing of the poem) is both concealed and revealed in the act of writing. 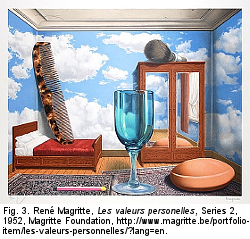 Magritte’s Les Valeurs personelles (Personal Values) (fig. 3) is possibly the work that inspired Zend’s “Climate.” Like Zend’s poem, Magritte’s still life discombobulates the viewer’s sense of indoors and outdoors, and it subverts the normal utility of objects, as in the giant comb and wine glass. Magritte’s surrealism disturbs the normal context of objects (indoors becomes outdoors; small becomes gigantic), a feature of his work that informs Zend’s self-referential poem.
Lastly, in 1971, Zend wrote in Hungarian ten brief poems each entitled “Magritte,” which Janine Zend published in the posthumous collection Versek, Kepversek (1988). As far as I know, no English translation exists of these poems.
And this may be as good a place as any to point out that many other poems by Zend remain untranslated into English, which poses a problem for a more complete discussion of his work. A review in the Ottawa Journal of Zend’s first book of poetry, From Zero to One, praises efforts to translate and publish his poetry:

The poetry of Hungarian-born Robert Zend is surreal, brilliant, and witty. Zend’s fantasies operate between the twin poles of profundity and humour. John Robert Colombo believes (and with reason) that were Zend writing in English or French, he would be recognized as one of Canada’s leading poets: “But because he writes his witty, inventive, resourceful and extremely imaginative poems in his native language, he is known only to a handful of Canadians.”3

Since that time, a good deal more of his work has been translated, and some Zend wrote in English himself. However, much still remains untranslated, including three collections that Janine Zend published after Robert’s death: Versek, képversek (1988), Hazám törve kettővel (1991), and Fából vaskarikatúrák (1993). It would be a gift to Canadian and world culture if more of his works were made available to a wider audience. The republication of out-of-print editions would be a most worthwhile project, as would a collected or selected works edition.

Japan: “The Great Spirit of a Small Nation”

Some of Zend’s poems and visual works were influenced by Japanese poetic forms and cultural traditions, namely, haiku and origami. Among Zend’s unpublished manuscripts is a collection of haiku from the mid- to late-1960s entitled The Fourth Line. Zend states that although he is a “true admirer” of Japanese culture, he makes no claim to approaching anything “faintly similar to the perfection of the original Japanese haiku”:

Besides a lot of other faults, my biggest “westernism” is that I could not eliminate my ego-centrism from my transcendental approach to existence, although I would not give up keeping on trying. . . . Consider [these poems] only as efforts to understand and appreciate through experience the great spirit of a small nation, among the big ones.4

What the haiku in The Fourth Line might lack in formal orthodoxy, Zend makes makes up for in inventiveness, including the following variations:

Below is a brief sample of poems from The Fourth Line:

SUNDAY AFTERNOON MOOD:
A POEM IN WHICH THE POET TRIES TO EXPRESS
THE EFFECT OF THE WEATHER
ON HIS MOOD

Among Zend’s Japanese-influenced concrete experiments are works inspired by origami, including a vanishing origami sequence and a page of concrete poems that “folds” the word “origami” in various two-dimensional configurations (figs. 4 and 5):

In his variations on haiku and renderings of origami Zend approaches Japanese traditions with humility and admiration, yet also infuses them with a spirit of playful inventiveness that shows a range of approaches from lyrical to conceptual, and from linguistic to visual.