Posted on February 5, 2010 | 1 Comment
I just ordered Barbara Guest’s Collected Poems (Wesleyan, 2008), edited by daughter Hadley Hayden Guest and prefaced by Peter Gizzi. I’m only familiar with Fair Realism, so I’m looking forward to experiencing the trajectory of her work, the changes that it underwent during her life. I love the musicality of some of the work in Fair Realism. “Fugue” is sometimes used to describe such poetry. It’s not an exact parallel, but it does capture the idea of intertwining motifs and echoes—sonic, semantic, and metanymic—as well as the idea of the poem being a language and a thing unto itself, opaque yet also, strangely, lucid. Guest’s music isn’t so decentered as to be dodecaphonic. Instead, hers is a music on the brink of atonality yet still somehow still exerting a centripetal force through its hints of tonality and its recurring motifs—akin, perhaps, to Messiaen, Bartok, and Stravinsky. Janacek also comes to mind.

Below is “Bleat,” a short poem from Fair Realism. 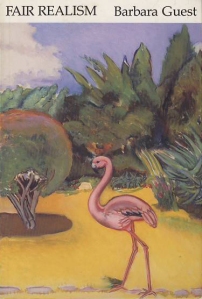 wet to root and pavement
tent sagging like an oyster

“the city has another soul”

gnat passes someone swallows
“another soul”

“the city also”
stole the bench and echoes

This entry was posted in poetry and tagged Barbara Guest, Fair Realism, poetry. Bookmark the permalink.

One response to “Barbara Guest: “Bleat””