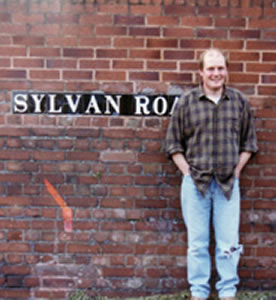 On first reading the poetry of Rupert Loydell, a fairly recent discovery for me, I felt an immediate poetic kinship. And now I feel an indebtedness as well, since his work continues to inspire me in my own poetry. Here is a poem from A Conference of Voices that I feel particularly drawn to:

Our baby swings slow-motion against the sky
chuckling as she comes towards us,
before reversing away still laughing.

I waited for a friend in the dark by the cathedral.
Life revolves around it, but no-one needs it any more;
we take for granted that meaning exists.

The sun swings slow-motion across the sky.
I push our baby, asleep in her buggy,
around the streets. Time passes so slow.

I have never known these suburbs so well:
the empty lawns, blank windows, tidied streets.
The days pile up, battered at both ends.

Doubt swings slow-motion across my life,
questioning how I spend my time,
muttering persistently about love.

With apologies to Loydell in case I miss the mark, I’d like to offer the following appreciation of his poem in an old-fashioned close reading.

Despite the cheerful opening image of a laughing baby on a swing, a sadness permeates Loydell’s poem due in part to the emphasis on the passage of time, exemplified by the motif of the slow-motion arc. The melancholic mood is also expressed in other motifs: the missed connections, the alienation of the speaker from his own existence, and the feelings of futility in the passage of time.

Failed or absent connections are the norm in the poem. The baby swings joyfully, but if hands connect with his body to push him, they are not evident. The speaker awaits a friend but doesn’t say whether or not the friend ever arrives. A feeling of oppressive ennui haunts the speaker’s stroll with the sleeping baby in the buggy. Instead of feeling comforted by his familiarity with the neighbourhood, he instead observes the clean orderliness of the suburban landscape with its “empty lawns,” “blank windows,” and absence of people.

Because of the speaker’s keen awareness of the present moment, time seems to pass slowly: the swinging arc of the baby and of the sun are depicted as is they were slow-motion film clips.  Despite the unhurried pace of life, the days inexorably “pile up,” and the speaker feels less than satisfied with the meaning of his life, the days being “battered” both in the past and in the anticipated future. He knows that meaning exists, even though religion no longer provides the framework, but that meaning is subordinated to his feelings of separateness from others and anxiety about the trajectory of his life.

The personified doubt of the last stanza swings across the sky marking the passage of time and “muttering persistently about love.” Doubt appears as the mouthpiece of time, which accumulates the days in a futile pile.

In the second stanza, doubt’s skeptical turn of mind questions the necessity of God to give meaning to existence: “no-one needs [the cathedral] anymore.” Doubt might also cause us to take an ironic stance toward anything that smacks of certainty or sincerity. But here, doubt, instead of urging a cynical attitude towards love, instead seems to encourage a questioning of the things that humans do that lead to the absence of feelings of connectedness, of expressions of love. Doubt doesn’t loudly trumpet an imperative to connect, to bridge the gulf separating self from other and self from self. Instead, it “mutter[s] persistantly” like the speaker’s cranky conscience urging him to re-examine his life and to embrace human connection.

Loydell’s table-turning gesture to have doubt, not a more positive agent, muttering about love as though it were the underlying drone in the noise of life, is an apt stroke. Instead of encouraging us simply to fill the gaps in our lives with love, doubt urges us to question what it is that created the gaps in the first place. 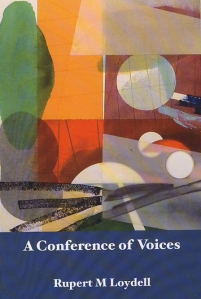 This entry was posted in poetry and tagged A Conference of Voices, Camille Martin, poetry, Rupert Loydell, Shearsman Books. Bookmark the permalink.