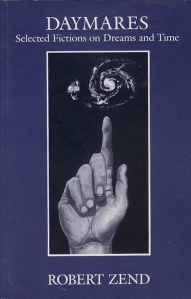 About a year ago, a frend who used to live next door to Robert Zend gave me a copy of Daymares. Already having a stack of unread books at my bedside, I put it on my shelf for another day. Recently, I came across his name and retrieved the book from the tail-end of my short story collection. Now I can hardly put it down.
Zend’s stories continually involute expectations about identity, time, and the distinction between reality and illusion. Shape-shifting characters, dreams within dreams, anachronisms, and paradoxes keep the reader adrift in a fantastical realm whose often dark irrationality explores mysteries of humanity: uncharted cognitive depths, the burdens of history, and the continuities between self and other.
Daymares is a genre-blending work containing mostly short stories but also poetry and concrete poetry (“typescapes”). Some of the stories offer twists on religious mythology, including “The End of the World,” a comical revision of the Apocalypse in which the narrator scoffs, “Mankind, shmankind!” and boffs his neighbour’s wife as the four horsemen gallop toward the annihilation of the earth into smithereens—sort of. Others, such as “A Dream About the Centre,” explore the vastness of human cognition in the blink of a waking dream. One of the most moving stories, “My Baby Brother,” confounds time and identity in exploring issues of Holocaust death, survival, and the continuity of life.
This Hungarian-Canadian writer will appeal to anyone with a penchant for Jorge Luis Borges’ mind-bending labyrinths, paradoxes, and dreamscapes. But Zend is an original swimming in a similar stream of fantasy and dream, navigated with keen intellect and feeling for the human condition. Borges wrote to Zend: “You consider me one of your masters, yet you were my pupil even before reading my work.”
After relishing Daymares, I eagerly sought other works by Zend and ordered From Zero to One, a collection of his poems. Click here for Glenn Gould’s tribute to Zend on the back jacket.
Below I’m reproducing an excerpt from Zend’s introduction to the book as well as two poems and two typescapes.

from “Introduction to an unpublished manuscript entitled
Selected Dreams”

Although the Sun declared it a false doctrine, we still secretly accept the creed of Darkness, which teaches us that the land of dreams is common for everybody: it is not three-billion individually enclosed lands, but one. It obeys not three-billion personal laws, but one. It is a common land where we all meet each other, and these meetings will be unremembered during the linear Sun-time, by the vertically erected individuals who intermingle on the curved, collective male-plane. We all believe—though we know it isn’t true—that the land into which we submerge (while our horizontal bodies rest, tossing and turning about) is real, as real, if not more, than that from which we sank down. Originally, we were all the sons and daughters of Darkness: that was our prenatal land, the Atlantis-womb before the ejaculating rays of the aroused Sun-lord fertilized it, generating us who grow and pop out into the light. We never lose our nostalgia for the cool, dank, soily shadow-shapes of the womb.
This is the world of dreams from which, at the very beginning of our personal lives it was so hard to be torn away. This is where we spent most of our early time, sleeping. Gradually, as the duration of our sojourns in that world decreased, our time in the clear, collective, articulate world correspondingly increased. The sword of merciful death finally liberates us forever, from the task of wasting even short hours in this male-reality, so that we can return completely to virgin mother-existence. Death allows us back to the land of time-spacelessness; to the tiny centre point of our individual self which strangely coincides with the three-billion other human centre-points, with those of the dead ones, with those of our more ancient ancestors: swimming, crawling and flying creatures, rooting-stretching plants and perhaps even with the centre-points of other alien-living-units, of agitatedly swirling atoms and majestically rotating galaxies.
The real difficulty, for both the individual and the race, is not to learn the language of Darkness, but rather to learn the language of the Sun. Only the minuscule peak of our iceberg-soul uses Sun-speech. Its bulky expanse hidden under the surface still speaks the ancient language of Darkness: we consist mainly of dreams and only negligibly of wakefulness. By collective agreement between the Sun-ruled ego-peaks, which engage themselves in labyrinthine sociopolitical mythologies, this original language is marked with the stamp of insanity. This “insanity” lurking in all of us, even at high-noon, never stops giving whispered suggestions to our seemingly sane, wakeful structures. That is why we periodically grow sick of them and, through bloody revolutions, try to change them back to the original Utopia which had existed in the Atlantean womb-past, and not, as is erroneously hypothesized, in the Sun-like, glowing erection-future. All these attempts are, of course, futile. It is impossible to convert rocks into clouds, father into mother, iron into fantasy. We don’t have to learn to speak the language of dreams because we never forget to speak it: we practise it a third of every day; we all come from it, persons as well as species. It is our real mother tongue: translations into it are impossible. Everything else: literature, communication, institutions, law, family, society, love, cities, technology, religion, art and science, is already a translation from it—and unsuccessful translations at that: like ruins disintegrating in an alien environment.
You can dream of a lion which is as harmless and cute as an Easter Bunny, or of a motionless pillar, which is as menacing as a rapist. You can dream of lovemaking as unpleasant as slavery, or of bland, grey flower-pots as warm and sensuous as rosy-hued flesh. Translating them with Sun-lit words gives rise to impenetrable jungles of misunderstanding in which sameness means difference; nearness, distance; flux, solidity; consecutiveness, simultaneity and repetition, comparison. This language knows no word, its events do not provoke emotions, its objects do not lend themselves to symbolization. On the contrary, it informs us of the bankruptcy of words: its emotions provoke events and its abstract objects are expressions of solid symbols.

Nothing dreams Something
but Something is mostly Void

Vacuum dreams a Universe
but the Universe is mostly Ether

Ether dreams Galaxies
but a Galaxy is mostly Space

Hollowness dreams Beings
but a Being is mostly Empty

Chaos dreams Existence
but Existence is mostly Nothing

Nothing dreams Everything
before it is ready to awake 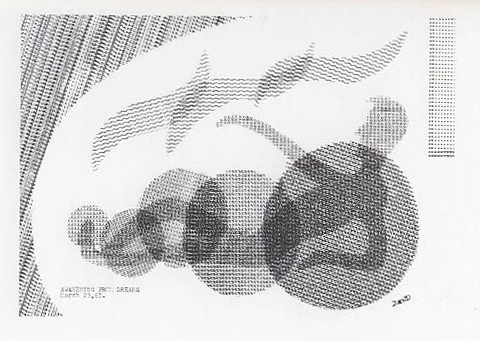 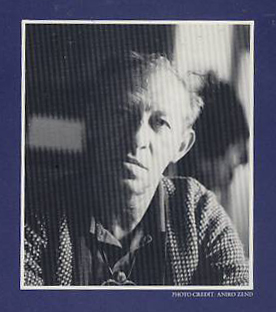 One response to “Robert Zend: Dreams Report the Bankruptcy of Words”