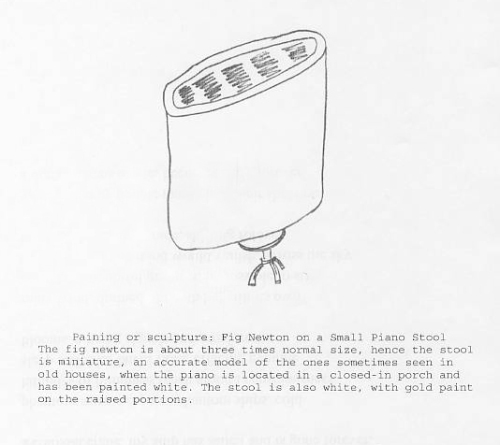 Coloured Letters, Giant Body, Faces and Voices in a Crowd

Like many other people, I experience visual, auditory and sensory halluciations during that twilight state just before sleep, especially when I’m falling asleep reading a book. I’m still looking at the page of words, but the page has been transformed into colourful geometric patterns. It’s a bit like looking at one of those tests for colourblindness, only with letters instead of dots: 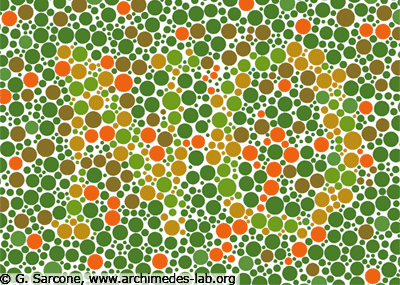 Sometimes the colours of the letters are aligned in diagonal stripes; they are always colourful and incandescent. I can no longer read the actual words; however, I’m aware that I’m still looking at the page when I fall into this state. Although the patterns don’t move, it does seem as though the page is a living thing. They are beautiful and strange.

Another kind of hypnagogic experience is what I call the “giant body.” I often have this experience lying down, although I have also experienced it, for example, driving a car on a monotonous highway. At its onset, I feel a heightened sense of proprioception – the sense of my body’s location in space. This segues into the feeling that my body has become very, very large. I’m a giant, like Gulliver in Lilliput. I feel myself expanding until I’m not sure of the boundaries of my body anymore.

Sometimes, the hypnagogic experience takes the form of seeing a succession of faces, each of which is distinct yet unknown to me. It’s as though each face were projected onto a mental screen for a few seconds before fading into the next face. In a variation on that kind of dream, I sometimes hear a crowd of voices buzzing incoherently. Every now and then, a louder and understandable voice emerges from the white noise of the crowd. The words, alas, are of a fairly mundane nature. I have dreamed short poems before, but it is unclear to me whether these would be called true dreams or hypnagogic dreams.

The last kind of hypnagogic experience is the most frustrating because of my inability to remember the insight or sequence of thoughts that came to me in that state. I know that I just had an interesting thought, but I cannot seem to make it surface again, so it remains an inchoate jumble. It’s as though, looking at the night sky, stars are less distinct when you try to look directly at them.

Hypnagogic dreams are more common than one might think. An 1996 essay in the British Journal of Psychiatry reports on a survey of 4972 people, ranging in age from teens to centenarians. According to the results, 37% claim to have had hypnagogic experiences. Fewer (12.5%) report experiencing the sleep-to-waking kind of dream called “hypnapompic hallucinations.”

Furthermore, none of the types of hypnagogic hallucinations that I have experienced is particularly unusual. The literature about hypnagogic dreams is full of descriptions of colourful geometric hallucinations, feelings of the dissolution of body and ego boundaries, visions of people and objects, auditory sensations, and the conviction that one could reveal brilliant insights into the meaning of life—if only one could remember them.

I note two striking qualities of my own hypnagogic dreams. First, the hallucinations are involuntary. That is, I can sometimes fully awaken myself if the dream state is shallow enough, but I cannot stop or direct the hallucinations while I’m in the hypnagogic state. Also, there is a noetic quality to the experience: it seems very real as it is happening. I have never mistaken a hallucination for reality, at least in the twilight states in which I do have some consciousness. I know that I am hallucinating and that my body isn’t really turning into a giant. But the hallucinatory experience has a reality of its own; somewhere in my brain, I am “seeing” geometric colours in front of me.

It is these two characteristics of the hypnagogic experience that remind me of synesthesia. As a child, I experienced musical tones as colours: C was white, D was yellow, E was orange, F was green, G was blue, and so forth. I knew that I was not actually seeing colours “out there,” yet the experience was in its own way very real, and also involutary.

I have studied a fair amount of the literature on synesthesia, and these two qualities are often mentioned in relation to the synesthetic experience. The case study by Richard Cytowic of a man who tasted shapes, for example, reports that when the man tasted mint, he experienced smooth columns before him. He found that taking amyl nitrate heightened his synesthesia; his reaction to mint became a visceral sensation of a thick forest of cool marble columns.

I’m not sure whether or how the experience of synesthesia and hypnagogic dreams are related. However, some people have reported synesthetic experiences during hypnogogia (Andreas Mavromatis, Hypnagogia: The Unique State of Consciousness between Wakefulness and Sleep.

My experiences of hypnogogic dreams seem to be of the garden variety, and not particularly creative. However, I recently found by chance an article by John Franklin on the subject of hypnagogic dreams that documents his hallucinations during such states. Franklin reports that in 1977, he started having hypnagogic dreams of surreal images, both two- and three-dimensional, as well as phrases and sentences charged with strange poetic juxtapositions.

Although Franklin claims not to have any special talents in poetry or art, his ten-year experience of hypnogogic experiences show a very imaginative capacity to juxtapose fairly unrelated images or ideas. The experiments of surrealism such as automatic writing come to mind.

He was able to draw the hypnagogic images from memory on awakening, but the texts presented the problem of being able to memorize only fragments before returning to full consciousness and writing down the words. Nonetheless, he was able to copy a great deal of them, perhaps improving with practice.

The “Fig Newton on a Small Piano Stool” that opened this post is one of his visions, followed by his description of it. Below are two more images and a few of his remembered poetic fragments.

I will only note that some of Franklin’s images and texts do not seem entirely random. Suppositions about the etiology of the odd juxtapositions would be guesswork. But an obvious example of an image hat has a rich palette of associations is the clever candy scoop made of candy. The reflexivity of this image strikes me as analogous to a metapoem: the candy scoop is not distinguishable in material from the candy that it picks up, in a similar way that a poem’s subject is itself or its creation.

Another example is the loaf of bread with the curled wires sticking out of it. The fact that I subconsciously erred in naming the image file “toaster” attests to a possible relationship: the wires seem to me to represent the curled heating elements inside a toaster.

The texts that Franklin reports are often poetically evocative:

Assuming a close identity between the scriveners and the children, one interpretation could be that imaginative writers must be able to play “underwater,” perhaps a metaphor for the role of the subconscious in creativity.

Sometimes the words are mysteriously poignant: “Why some people have felt so different alone in the same sweater”

I suppose that in my brief and rather superficial attempt to attribute meaning to these images and words I’m grappling with the problem of how these hallucinations came to be in the first place. Why does the dreaming brain produce such odd cognitive hookups? To what extent are they random or meaningful? I wonder whether any scientist has used brain imaging technology to try to find out which parts of the brain are firing when a certain kind of hallucination is being produced. Franklin doesn’t report that he ever underwent such imaging, but it seems to me that his kind of very specific hallucinations of paintings and sculptures might yield some interesting insights.

For Franklin’s complete article and journals of images and texts, go to 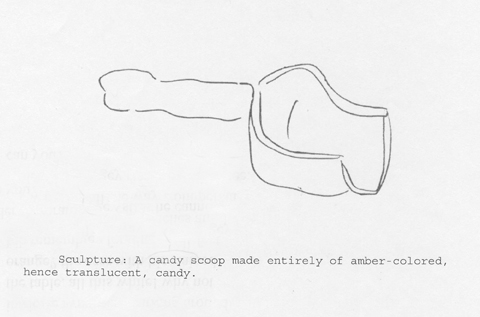 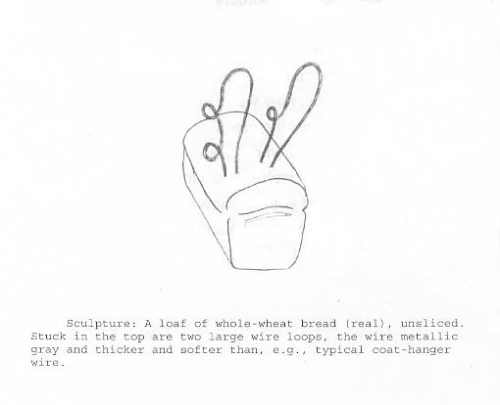 “It is this: wife has cheese;
It is this: eyes have breath;
Every patient rack and chain go to him.”

“Grasp the litter,
Hate the ladder,
Bend the letter of the law.”

“Hot sun on an afternoon wall
‘Tomorrow the trip is ended’
Tired bones, tired water In the lakes.
‘Who do These blue pots belong to?’
‘Oh, just let the grass grow!’”

“Lavish upon me the next-to-nothing of fine wood”